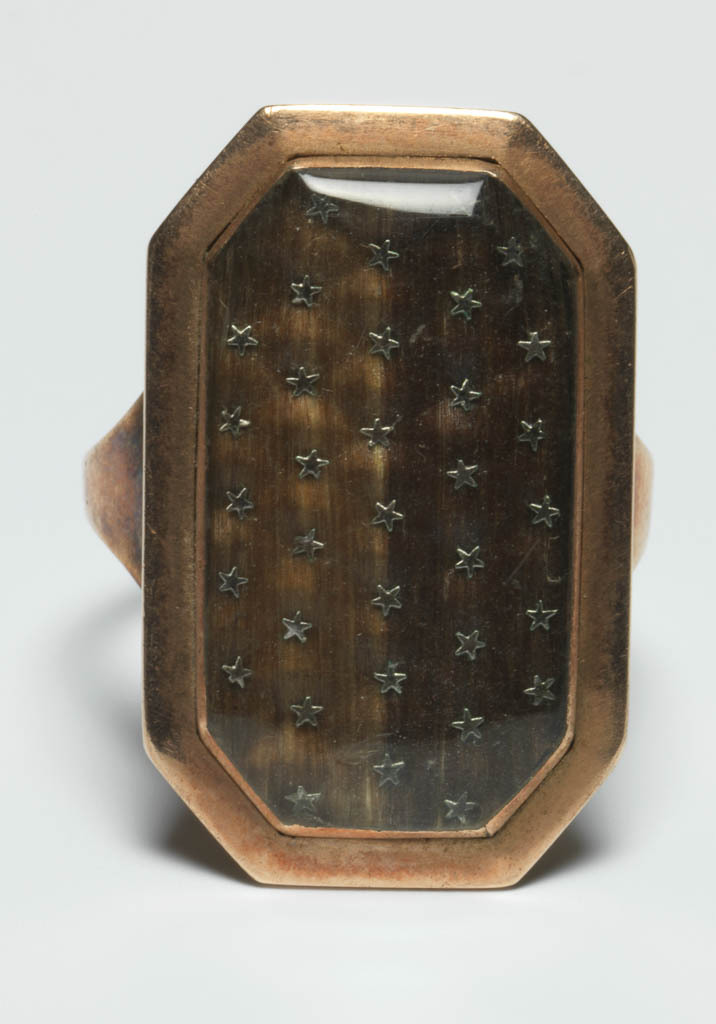 A lock of chestnut-coloured hair rests alongside another lock that shines like polished bronze. Bespeckled with 34 tiny metal stars, this intriguing ring would catch the light as its wearer’s hand moved. In fact, this star-studded ring immediately caught my attention when I started researching some of the Treasured Possessions objects. While this ring lacked the expensive enamel and gems of the other mourning rings in the exhibition, it is obvious that it was no less precious to its first owner.

Preserved for more than two centuries, this gilt-metal ring contains a story of immense loss. Under the surface of its glass bezel, this ring holds locks of hair in two different shades. On its underside the inscription, “NB Toms/Ob: 19 Dec 1784/At 5ys/W: Toms ob: 28 Mars 1786 At 11 ys” begins to further illuminate the ring’s meaning. This inscription indicates that the hair inside belonged to two children—one who died at the age of 5 in December 1784 and another who passed at the age of 11 in March 1786. Unfortunately, the names NB Toms and W Toms are too ambiguous to be traced without more evidence, especially because both children perished at such a young age, before they could leave more than a birth or baptismal record. Still, much information can be garnered from the ring itself.

When I first held the ring, I discovered how dainty it is [about a size O (UK)/ size 7 (US)] despite its large bezel. It was most likely made for a woman, probably the mother of these two children. While mourning rings were popular at this time and many children did not reach adulthood, this mother’s desire to carry pieces of her two lost children with her at all times struck me as particularly poignant. If a mourning ring contained hair, it usually held the hair of only one beloved family member or friend. However, in this example, one lock of hair was collected from a very young child and when, less than two years later, this child’s older sibling passed, their family decided to memorialise them together.

Since most of my research focuses upon religious material culture, the relic-like quality of hair in mourning rings has always intrigued me. In a mourning ring such as this, physical traces of ordinary humans are conserved and commemorated instead of the remains of a revered holy figure. In my opinion, this ring epitomizes one of the many facets that the Treasured Possessions exhibition explores—a treasured possession itself, the ring serves as a vessel that preserves the memory of two treasured children.